In Jean-Marie Straub’s entire catalogue of work – from 1963 to 2006 together with Danièle Huillet – past and present are brought into a single constellation, where the past (completed) finds its modernity, and the present a new completedness. Their films mark the end of the coexistence of a revolutionary conception of history with a traditional experience of time, no longer presented as accurate and continuous, but split up, as if in every brusque interruption it wanted to free itself from subservience to quantified time (time is not money), creating an experience of interrupted time, in the search for a full time as a true place of the construction of history. The project Homage to Italian Art! (In omaggio all’arte Italiana!), Jean-Marie Straub’s return to Venice after his Golden Lion “for innovation in the language of cinema” which he won in 2006 together with Danièle Huillet for Quei loro incontri (These Encounters of Theirs), can be understood in this sense. For his first time at an art Biennale, the French director presented an installation built on three different elements – image, sound and work materials – that reflect on his cinema and his intense and lengthy relationship with Italy (twenty films made in Italy since 1969, ten of which in Italian). The central corpus of his work draws essentially on Geschichtsunterricht/ Lezioni di storia (History Lessons), a film made in Rome in 1972, and more precisely on the last seven of the fifty-six sequences of the film. The dialogues we “see” and hear are taken from a fragment of Bertolt Brecht’s posthumous novel The Business Affairs of Mr. Julius Caesar (Die Geschäfte des Herrn Julius Caesar, 1956), written in several rounds during his exile from Nazi Germany. And it is an exile that takes shape in this incursion into Brecht’s novel, beginning with the structure: solid and distinct narrative blocks, four “books” compiled in Denmark (Svendborg, 1938), Sweden and the United States (1941-47), where in Santa Monica the playwright misses a collaboration with Hollywood (Hangmen Also Die!, 1943, directed by Fritz Lang) before his return to Germany. Straub read Mr. Julius Caesar about ten years after Brecht’s death and the publishing of the book, before settling in Rome with his wife Danièle, passing through Amsterdam, Berlin and Munich, on the run from France since 1958 due to the director’s conviction for having refused to do military service during the war in Algeria.

The central corpus of the work is the part dedicated to the film, which the public can watch in the small cinema fitted out in the Pavilion, and it is essentially made up of scraps of the last part of the last reel of the American copy of Geschichtsunterricht, seven out of fifty-six sequences. The 16mm of the film, still available today at New Yorker Film, has been digitally refilmed in a New York cinema by the great Iranian director Amir Naderi, in accordance with Straub’s precise indications, almost like an exhibit, from behind the glass of the projection room, with a double goal: to see how much his film has physically deteriorated – the colour has faded, everything tends towards a wishy-washy magenta, the image is shaky – and to force viewers into a paradoxical alienation from what is left of that work, making them the star of a tragic POV shot. What is seen from the glass? Someone condemned to death. Who is watching from that glass? We are.

The structure that “embraces” the little cinema, designed to house images (to the right) and sound (to the left), allows viewers to hear something that cannot be seen: dialogues from the film and live recordings of the long camera car on the streets of Rome in 1972 – from Via Garibaldi-San Pietro in Montorio via Campo de’ Fiori up to Via della Lungara – which together interrupts and punctuates the dialogues themselves creating a decisive rift in time. Thus, Straub decides not to show one of the classic sequences from his filmography, not to show the eternal city but to let people “hear” it, to give spectators the chance to relive the sounds of its piazzas, its streets, its link roads, its markets, its dialects and its motors, and to accompany this sound with the presence of textual material used during the work which led to the film.

As well as some precious materials and documentary photographs of the work, for the first time in Italy the typed dialogues are shown, where the continual repetitions are worked out with the actors and for  this reason are criss-crossed with marks like a musical score made up of pauses, accents, gaps and breathers. “It is not the rhythm of the verses and the metre, rather it is a hammering away at what this rhythm expresses.”6 These apparently simple notebook pages, repetition sheets and documents, nonetheless conceal a great power. As Derrida said: “Pure repetition, were it  to change neither thing nor sign, carries with it an unlimited power of perversion and subversion. This repetition is writing because what disappears in it is the self- identity of the origin, the self-presence of so-called living speech.”

Full text in the catalog published by Bompiani 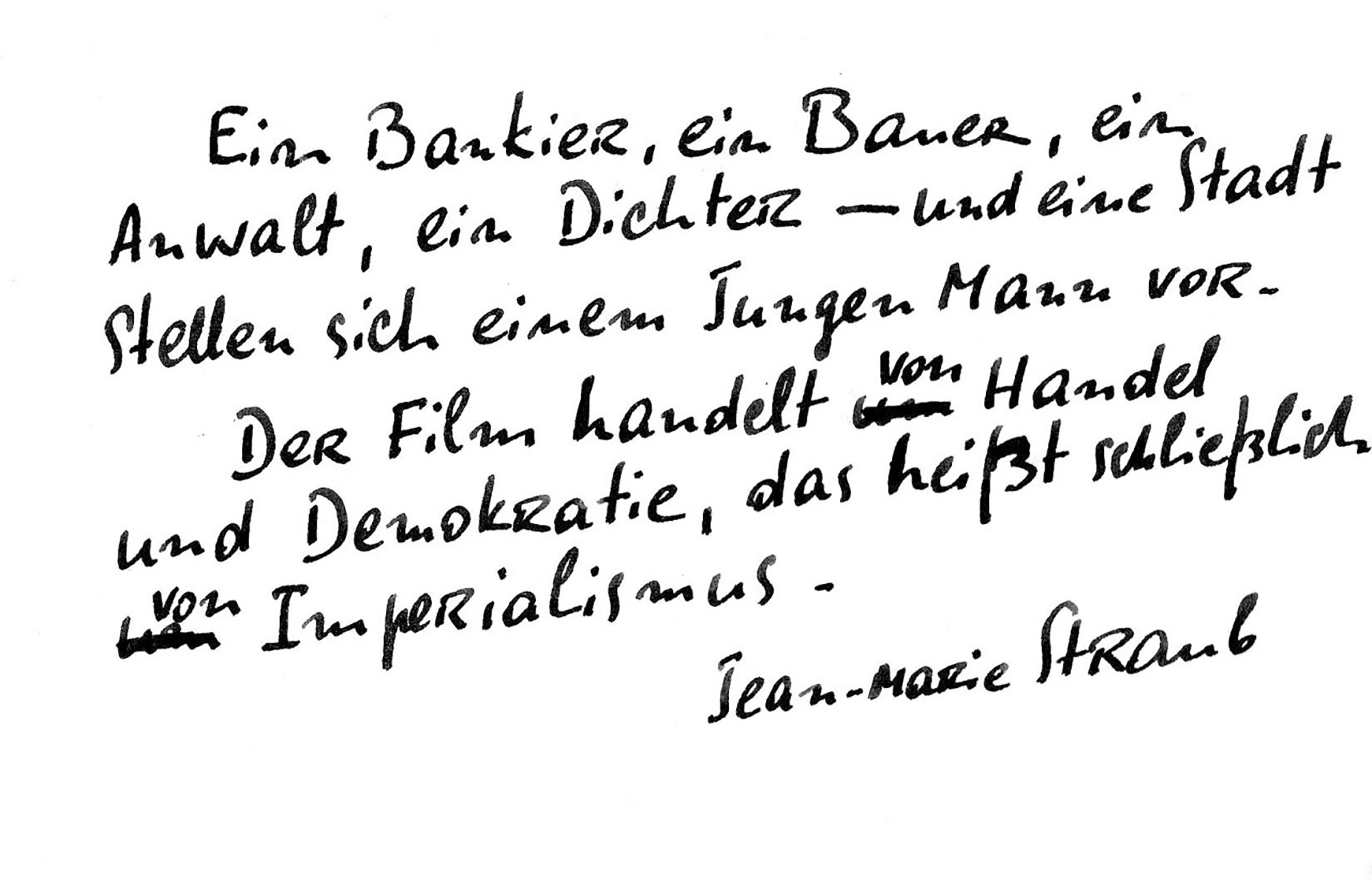 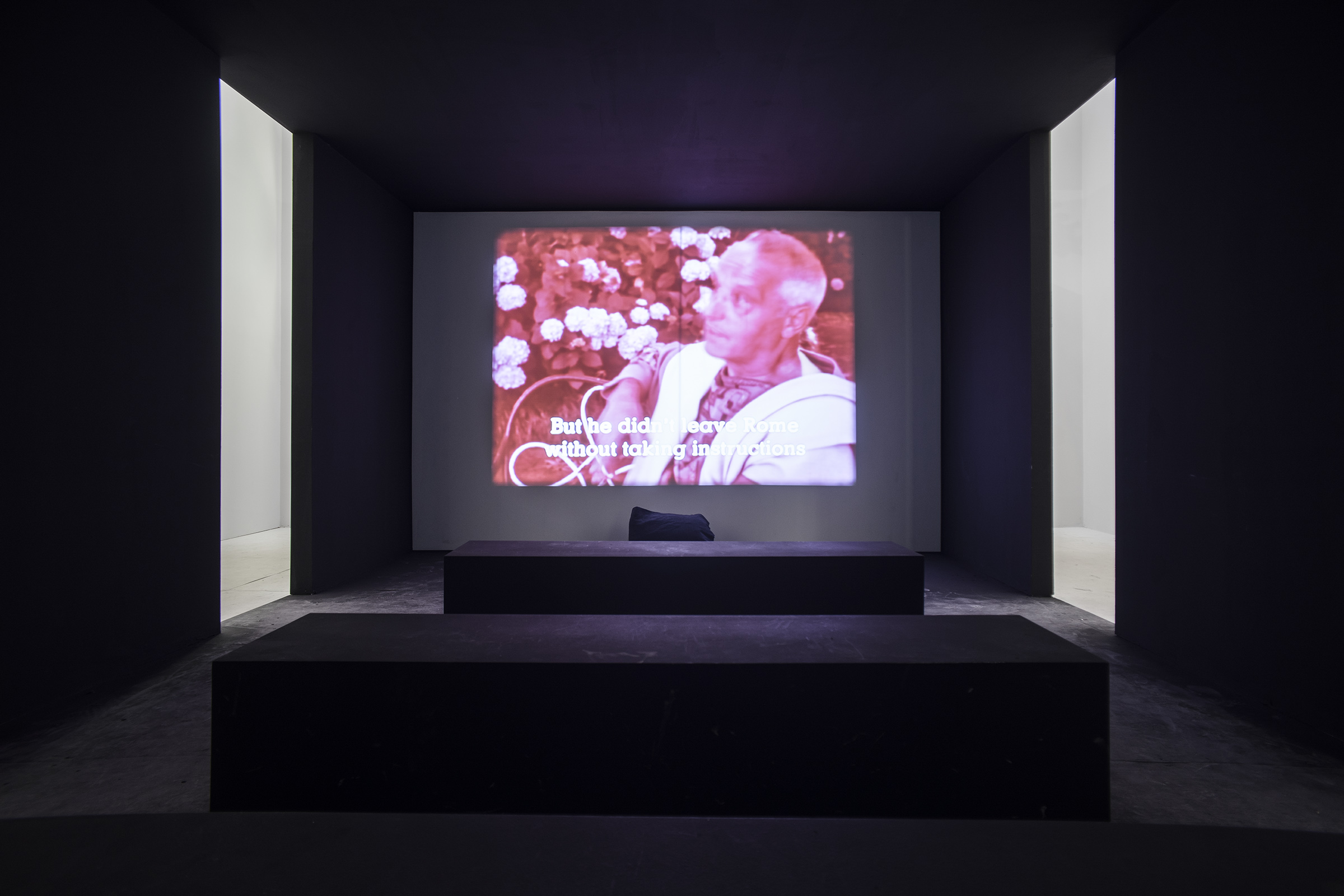 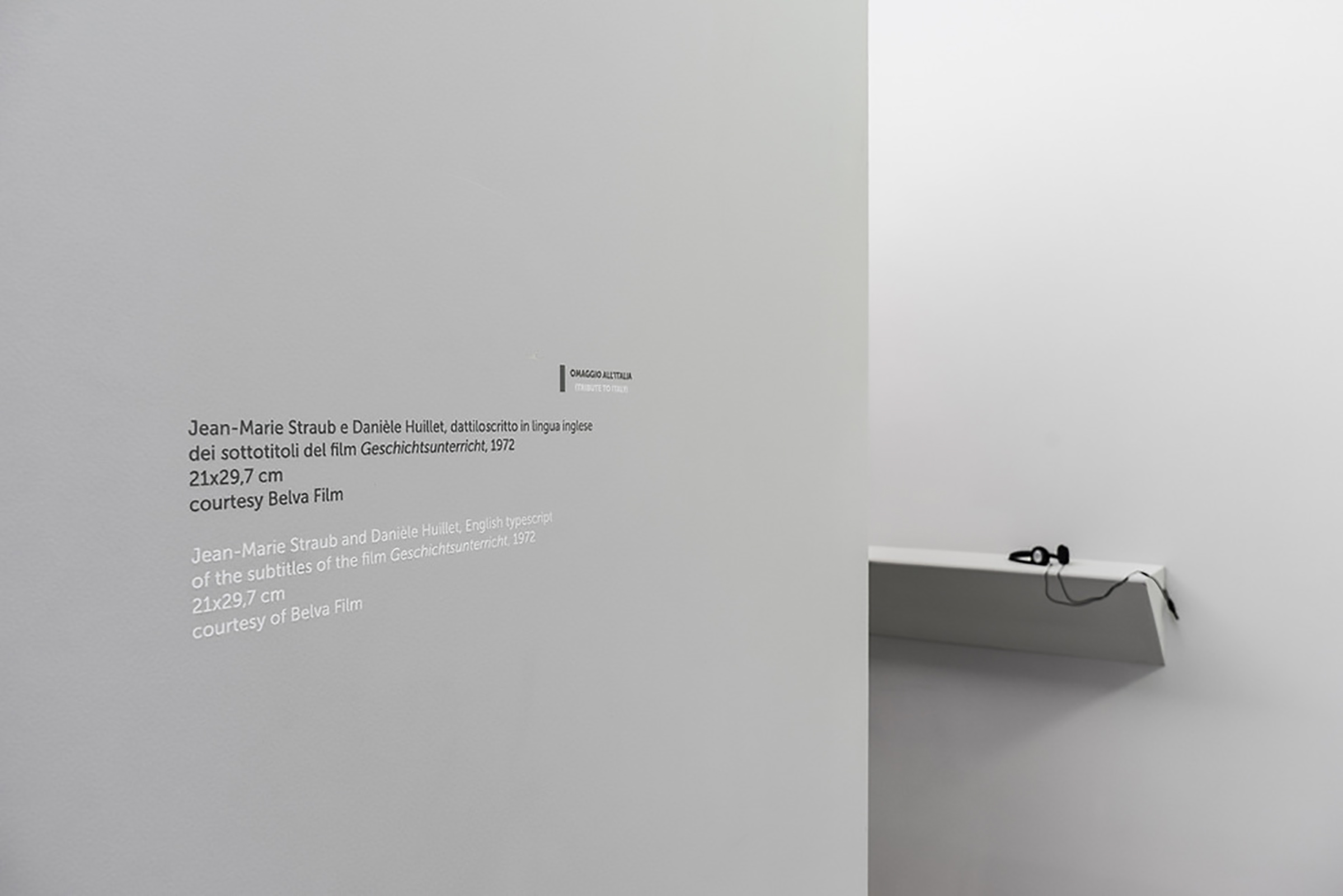 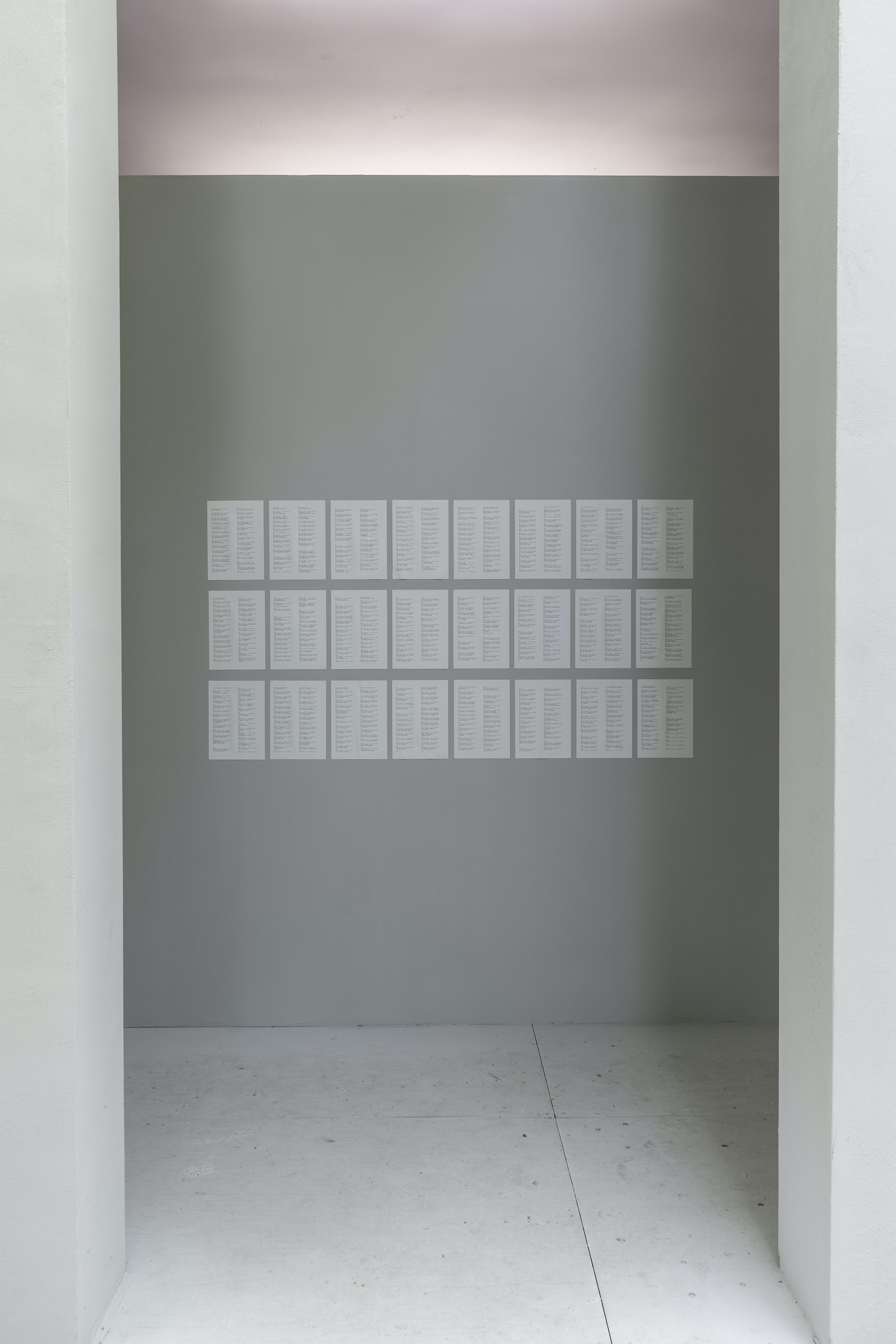 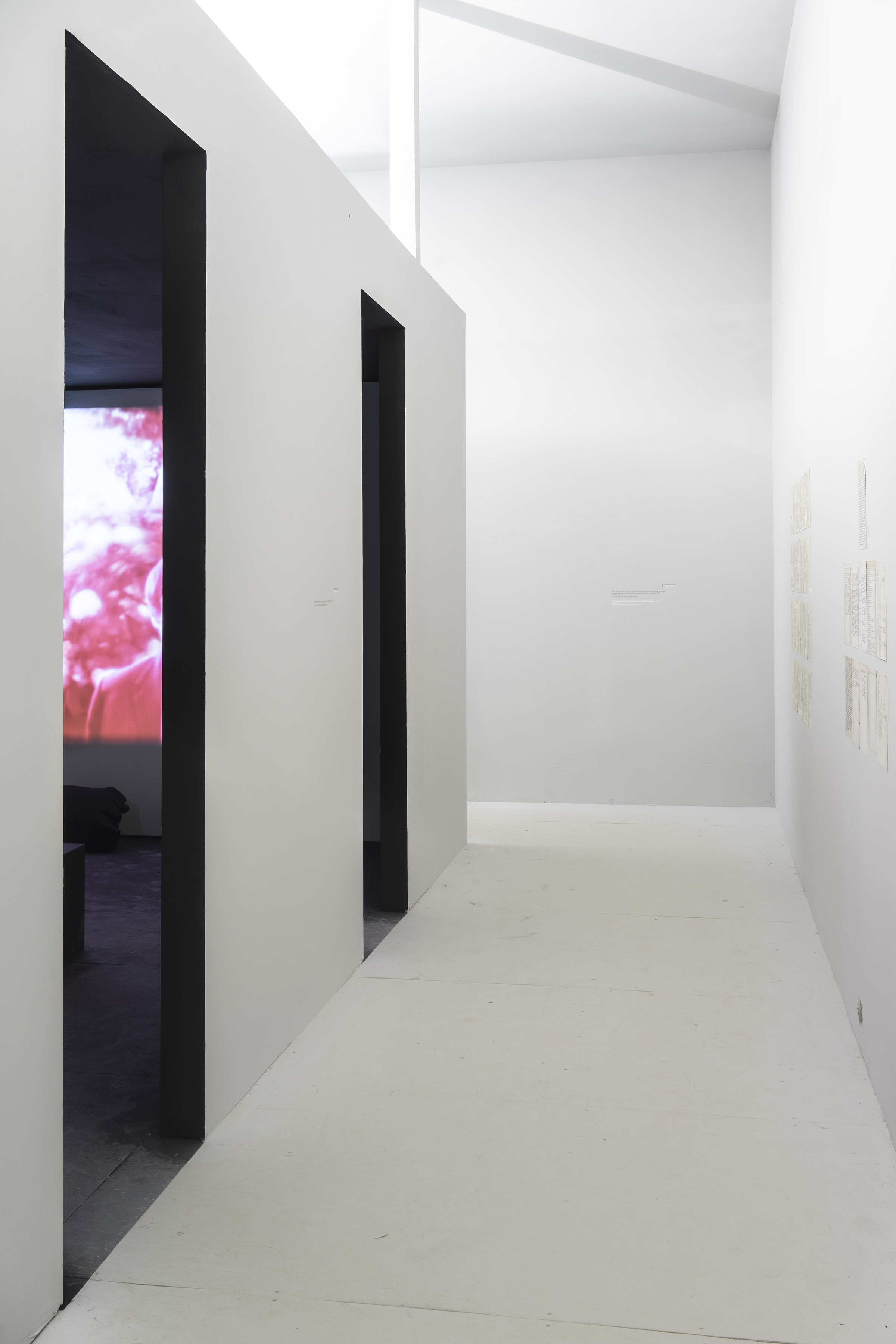 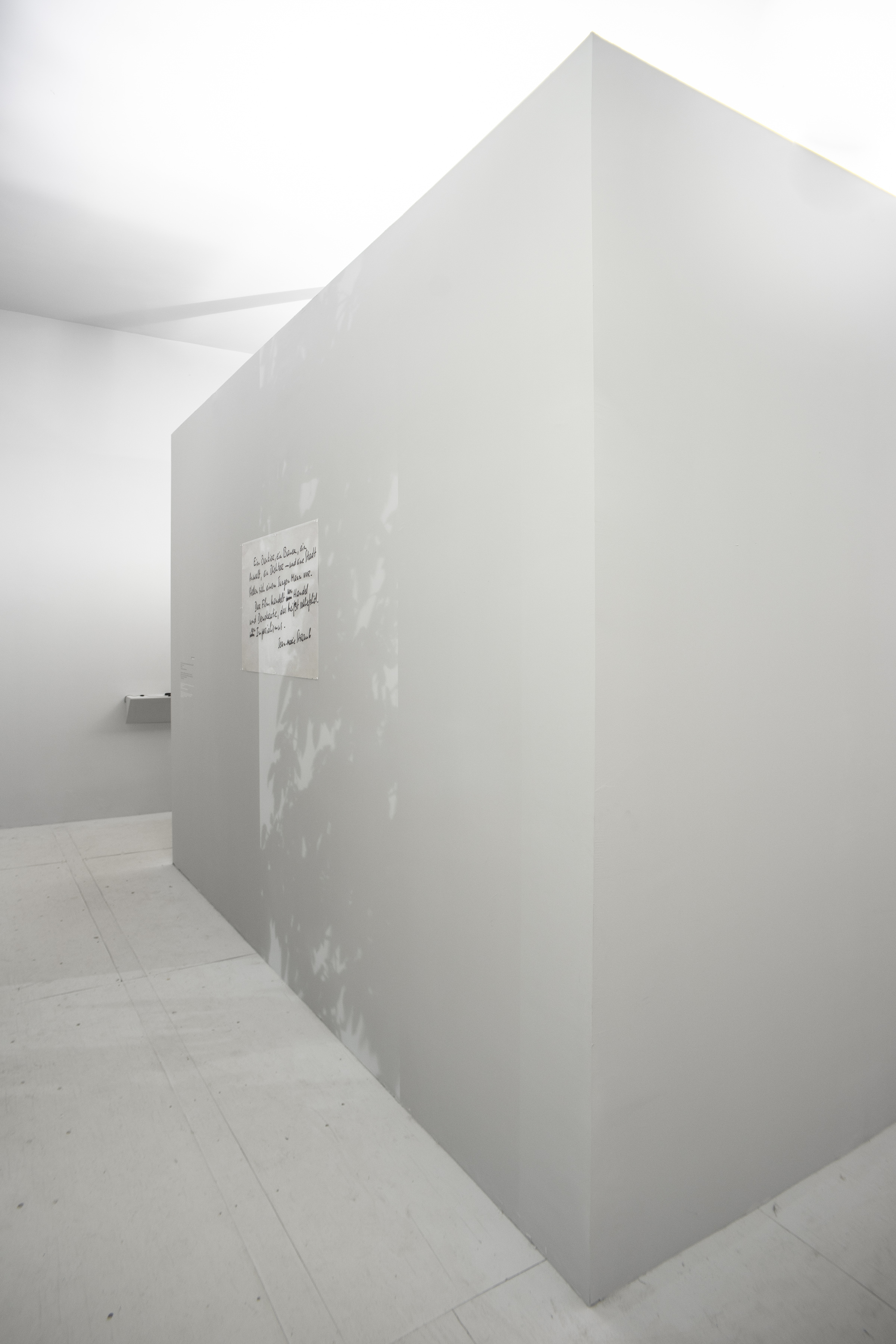 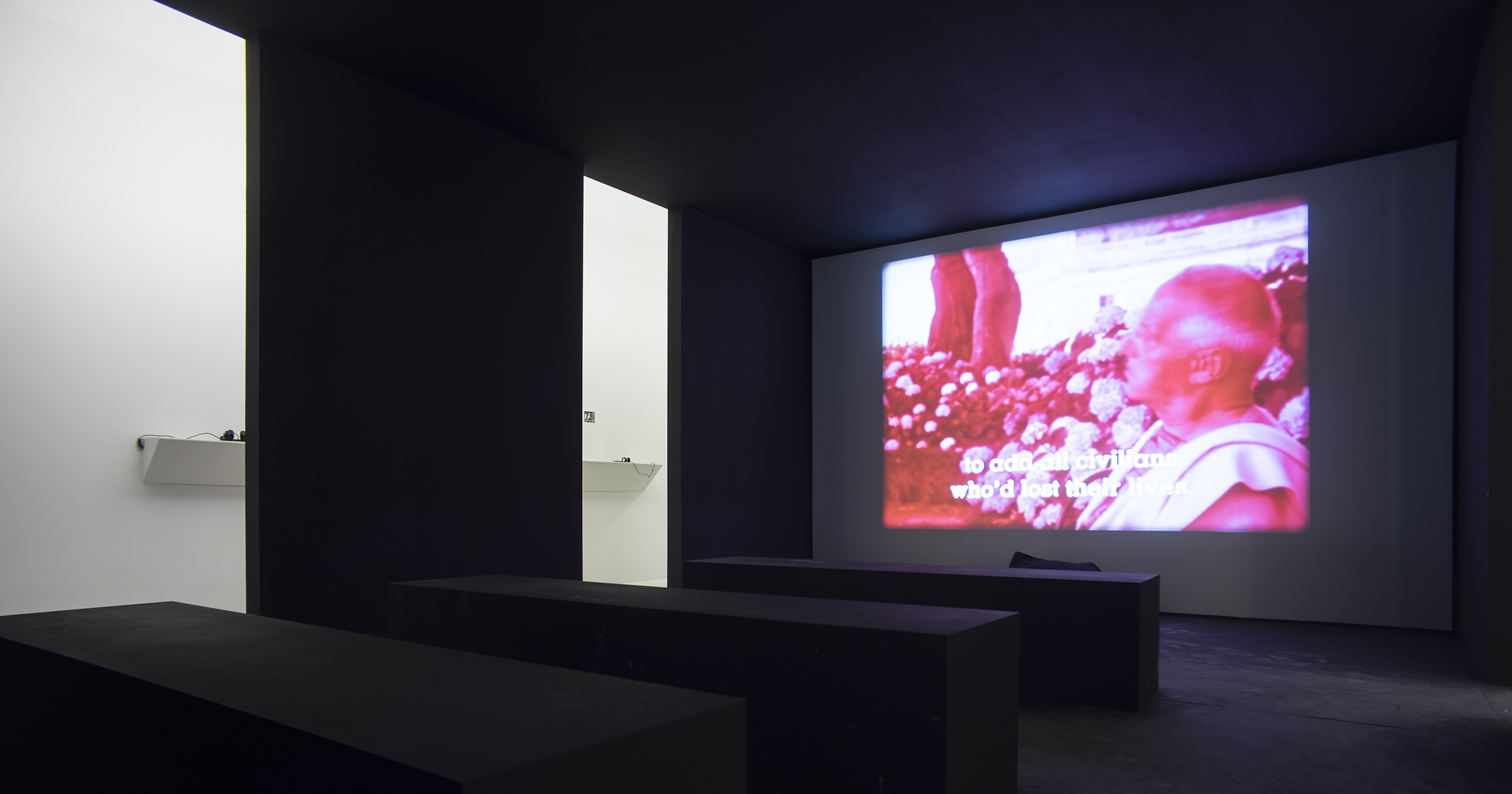 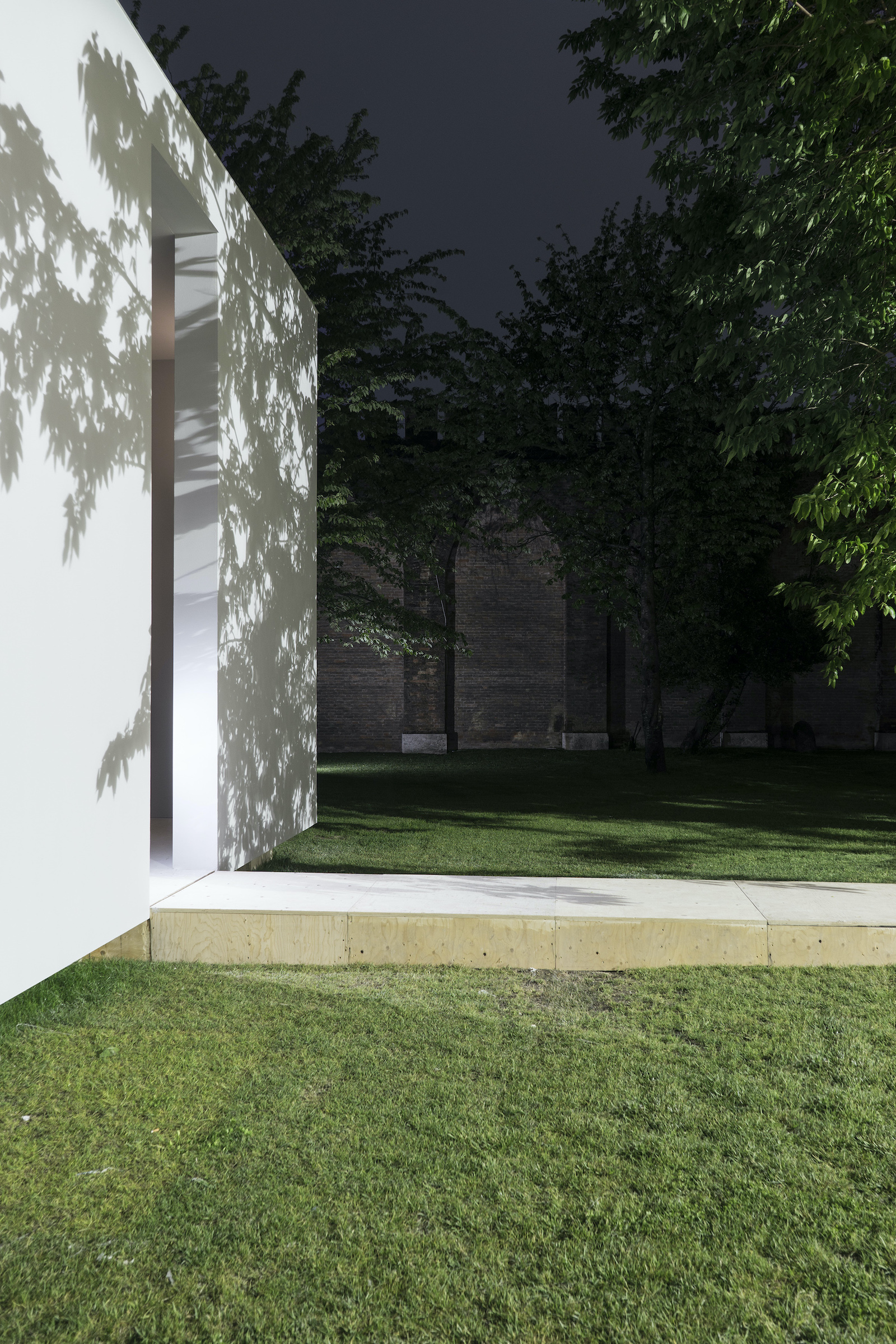 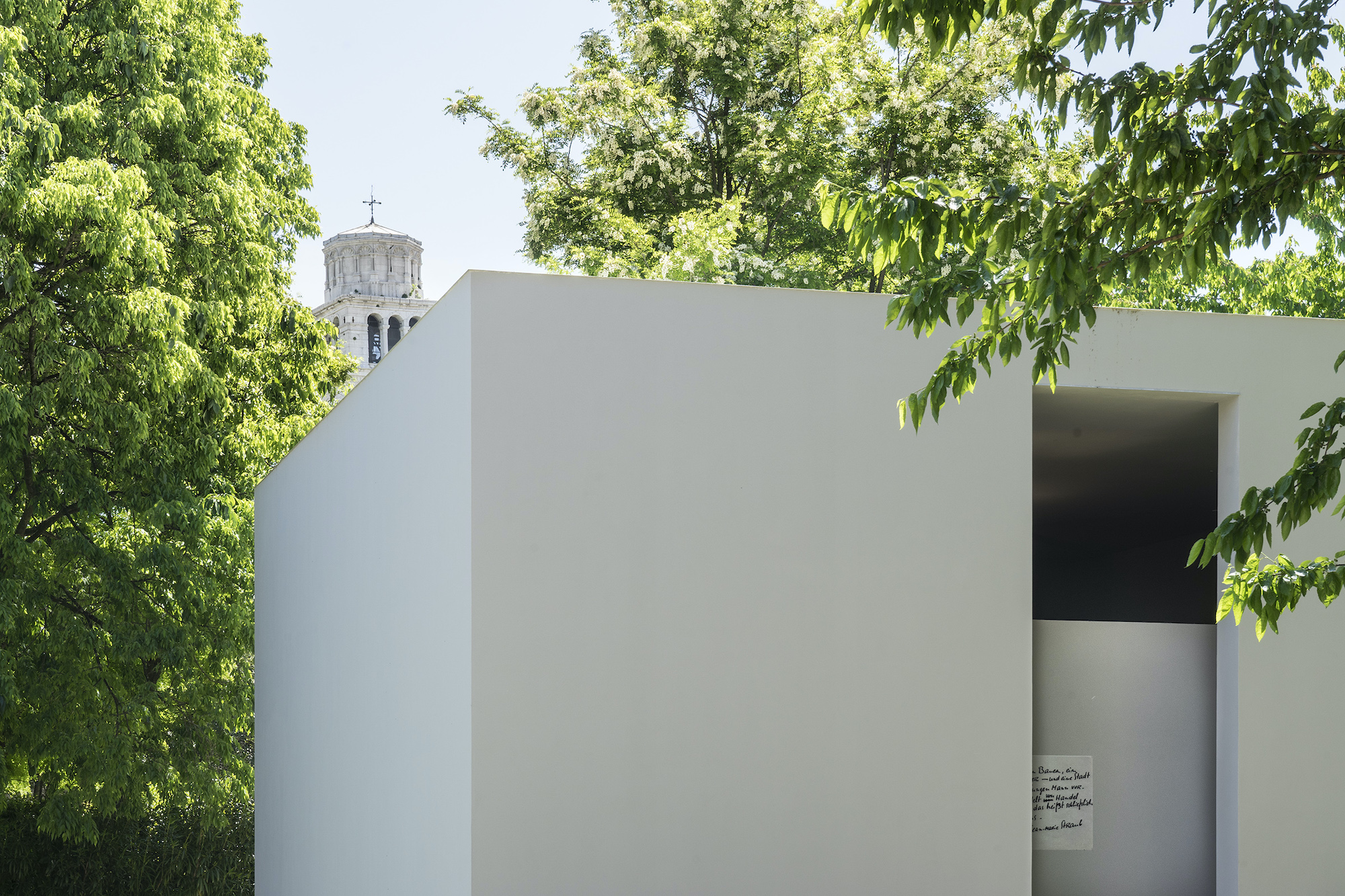 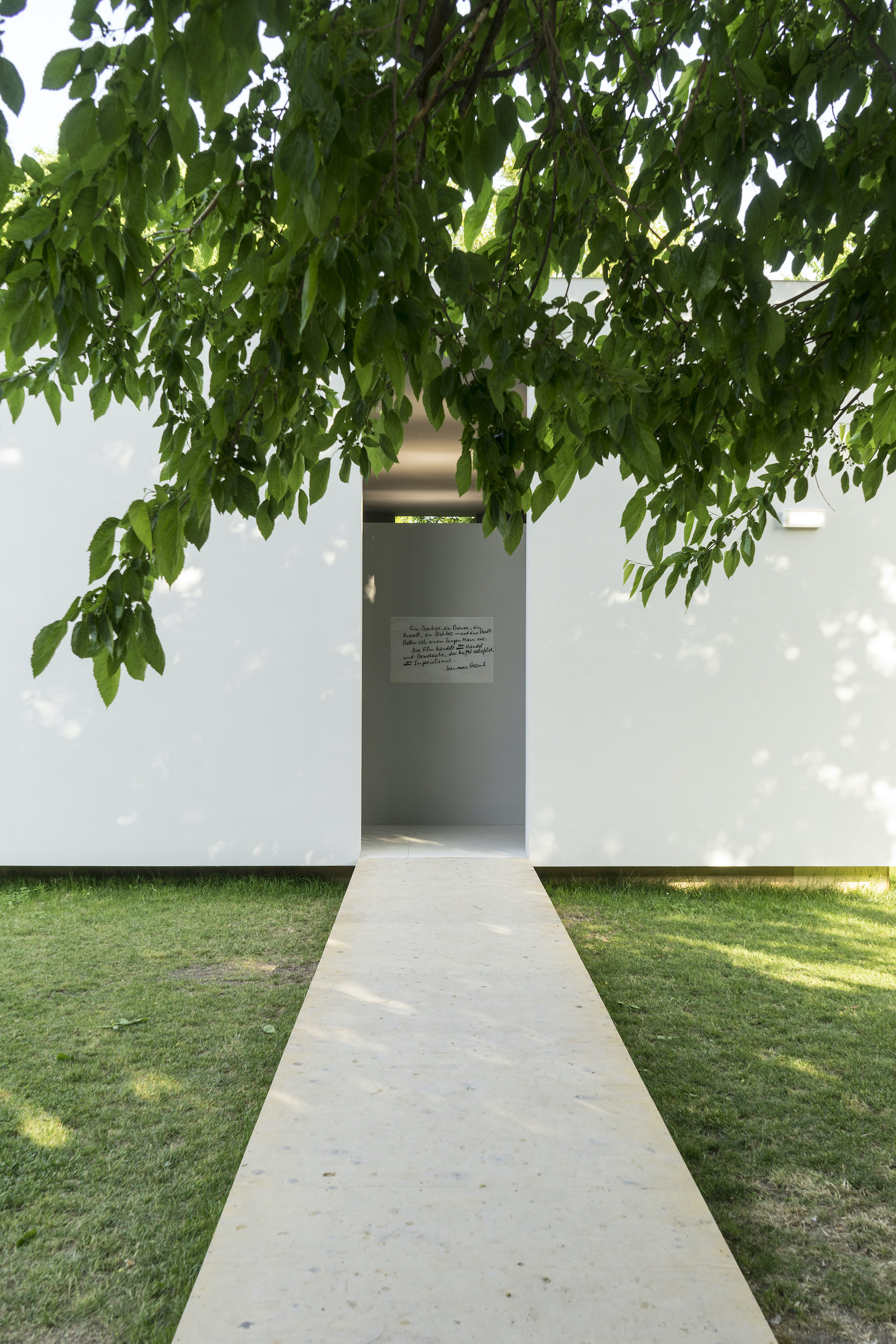