As you know, there is someone inside this cell. I would rather not talk about it. I believe it is an image. Against you, motionless thought, everything that is reflected in us of everyone comes to assume form, shine, and then disappear. In this way we have the most people, in this way everyone is reflected in each of us by an infinite glimmering that projects us into a radiant intimacy from which each returns to himself, illuminated by being no more than a reflection of everyone else.

And the thought that each of us is only the reflection of the universal reflection, this answer to our lightness, makes us drunk with that lightness, makes us ever lighter, lighter than ourselves, in the infinitely glimmering sphere which, from its surface to its single spark, is our own eternal coming and going.

Propped against you, thought against which I rest, my forehead on which my forehead lies heavy, impassable gravity that yields sometimes, nevertheless, to give me a feeling of the past, very cold space in which sterile space returns to space. Why must I keep you, you who keep me? It is a great concern. To live this way in everything so far from everything, and to sustain lightness as a weight, to address words to you that don’t reach you, don’t express me — and to hold you fast so that you remain strictly delimited, a lit- tle chamber where someone has to live.

I lay down for a moment. What calm next to you. What emptiness here. It seemed to me we were silent. A memory of light comes in through the little window, and it’s a cold brightness that penetrates everywhere, that creates the emptiness and is the brightness of that emptiness. I remember that room well, a room whose boundaries you define strictly, with your char- acteristic rigor, and which I can’t

leave, because it is already dominated by the outside. How exact everything is, more exact than it should be. You are acquainted with shadows. How strange that the darkness of the night should be this motionless, solitary brightness. I could describe to you the space that you form, perhaps without knowing it, and if I lean outside, I see the hall- way lit by the light; if I go out into it, already my steps come to meet me. But I won’t go out.

It wouldn’t take much for me to begin believing in my separate existence again and for me to add faith to the truth of images. However, I know that that would be to remember, and the time in which one can say I is limited, perilous. It is like a flame coming to light on one or the other of us and designating him to answer the general speech. Then what is happening? What issues from the earth is a strange voice, a stifled murmur, a dry, arid cry; this disturbs us, obliges us to hear, and who utters it? What is that single word on which the heaviness still in us concentrates and falls back, a too weighty feeling that breaks the circle and frees itself? Is it true that we can’t love each other, that we are too light for that, too joined together in our lightness?

Tere is a rumor which says that at a certain moment, the slow fire consuming the other world will make manifest its internal movement and secret unity. The fire burns only in order to bring to light the living plan of the great edifice, destroys it but in keeping with its unity, reveals it as it consumes it. The belief that the great edifice is now no longer capable of feeding a central fire strong enough to illuminate everything in a general blaze. The belief that one has reached the moment when everything is burning, when everything is randomly extinguished in myriad different hearths working where they like, as they like, with the cold passion of separate fires. The belief that we might be the gleaming signs of the fire’s writing, written in everyone, legible only in me, the one who answers the

general certainty — but that was at an earlier time and that was each of us —with his murmur. The belief that this belief is nothing more than the sadness and suffering of the fire, which has become too weak and already nearly broken.

Thought which allows me to be without suffering, thought in which I suffer so very far away from myself, to the point where I don’t exist, you who have a torment in the center of your transparency that you hide from us: don’t think I’m indifferent to your fate, I pay more attention to it than I should. But consider how vain, light, insignificant, truthless we are already, and always unsteady, always saying what never stops being said. Day and night, day and night. We’re over there, and the absence of secrecy is our condition. Even where impenetrability reigns, all the more impenetrable as it draws back moment by moment under pressure from you, nothing is secret, nothing is revealed that wasn’t revealed in the beginning. And yet, with you, I would like to talk in secret, in secret in relation to everyone, in secret in rela- tion to you. It is like a new desire. It is in me like a future taking me by surprise.

Sometimes it seems that certain faces, by coming together, try to sketch out such a face. It seems that they all eternally rise toward one another to cause that face to be present. It seems that each would like to be the only one for all the others, wanting all to be the only one for it, and to be, for each, all the others. It seems that the emptiness is never empty enough. The images’ eternal yearning, the delusion that lifts us up and involves us incessantly in the disorder of the night, lost and always brought together again in an outburst of joy where we find each other again. Illusion, the hap- piness of the illusion — why resist it? Why can’t all these faces mislead me? Why do you keep me away from them by this thought of the space that might make you visible for an instant — more invisible?

Waiting for a face. Strange that space can still hold such waiting. Strange that what is darkest should have this great desire to look at a face. Here, there are many of them, it’s true. Some are very beautiful, all have at least a certain beauty and a few, as far as I have been able to notice in the hallway, are wonderfully attractive, perhaps to the extent that they themselves, in the calm and the silence, are under the sway of the essential attraction. But this isn’t quite what I want. Maybe there are many faces, but only one face, neither beautiful, nor friendly, nor hostile, simply visible: the face I imagine you are, even the face you certainly are, because of the refusal to appear that exists in you, because of the grave motionlessness, the rectitude that never turns away, the transparency that cannot let itself be disturbed. And only what is disturbed can appear.

First to forget. To remember only where one remembers nothing. To forget: to remember everything as though by way of forgetting. There is a profoundly forgotten point from which every memory radiates. Everything is exalted in memory from something which is forgotten, an infinitesimal detail, a minuscule fissure into which it passes in its entirety.

Maybe you will be the exception, the brightness that does not grow dark. Maybe you will pass through the doors of terror without the shivering that is calm here, from wave to wave, is the tremor of calm with which we exalt ourselves, light watchkeepers around ourselves. And yet I have to see you. I have to torment you until the great nocturnal space grows quiet for an instant in this face that must confront it. As though it were necessary that you not renounce transparency and that, being bright, you remain ever brighter, a refusal of the unthinkable to the very end, so that there can be seen in you just what the others are losing in their premature happiness

at being visible. Too beautiful troubled faces. A face cannot be that. The very last face, merely manifest, beyond waiting and beyond reach. Face which is the emptiness, perhaps. That is why you must watch over empty space in order to preserve it, as I must watch over it to alter it, a fight in which we are together, close through distance, strangers in everything we share, presence where I touch you intact and where you hold me back at a distance, a distance formed of you but which separates me from you: a pit of light, a brightness in which I am buried. Face, face of expectation, yet withdrawn from what is expected, the unexpected of all expectation, the unforeseeable certainty.

Oh, if it is true that we were alive together — and, really, you were already a thought — if it is possible that these words flowing between us tell us something that comes to us from us, at an earlier time wasn’t I always, near you, this light, avid, insatiable desire to see you and yet, once you were visible, to transform you further, into something more visible, to draw you, slowly and darkly, into that point where you couldn’t any longer be anything but seen, where your face became the nakedness of a face and your mouth metamorphosed into a mouth? Wasn’t there a moment when you said to me: “I have the feeling that when you die, I will become completely visible, more visible than is possible and to the point that I won’t be able to endure it.” Strange, strange speech. Is it now that you say this?

Could it be that he is dying at this moment? Is it you who always die in him, near him? Could it be that he wasn’t dead enough, calm enough, strange enough, does he have to carry desire, memory even further, is that the extremely fine and amazingly distant point that always slips away and by which, slowly, with author- ity, you draw him, you push him back into forgetfulness?

Later, he asked himself how he had entered the calm. He couldn’t talk about it with himself. Only joy at feeling he was in harmony with the words: “Later, he . . .”. 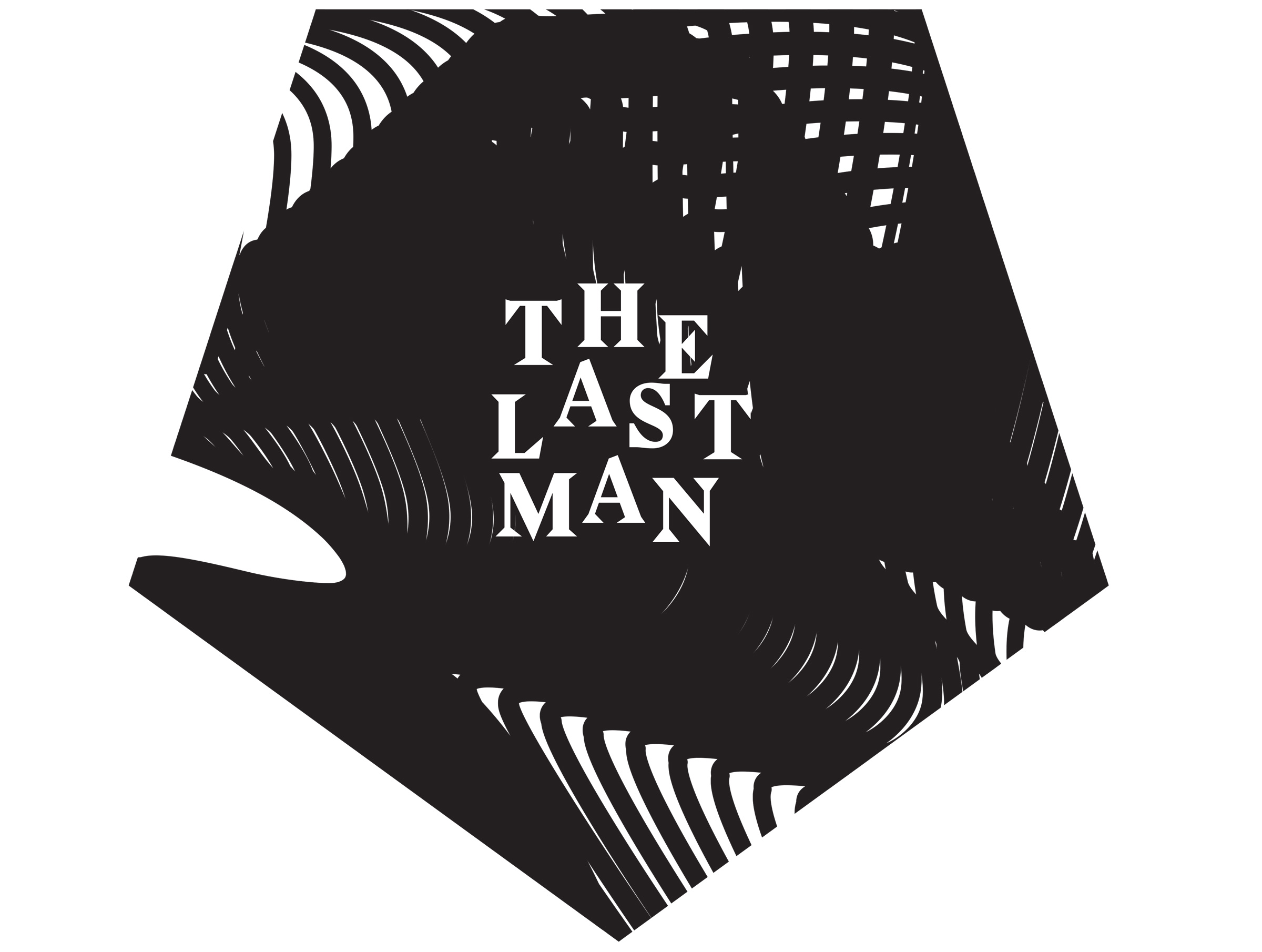 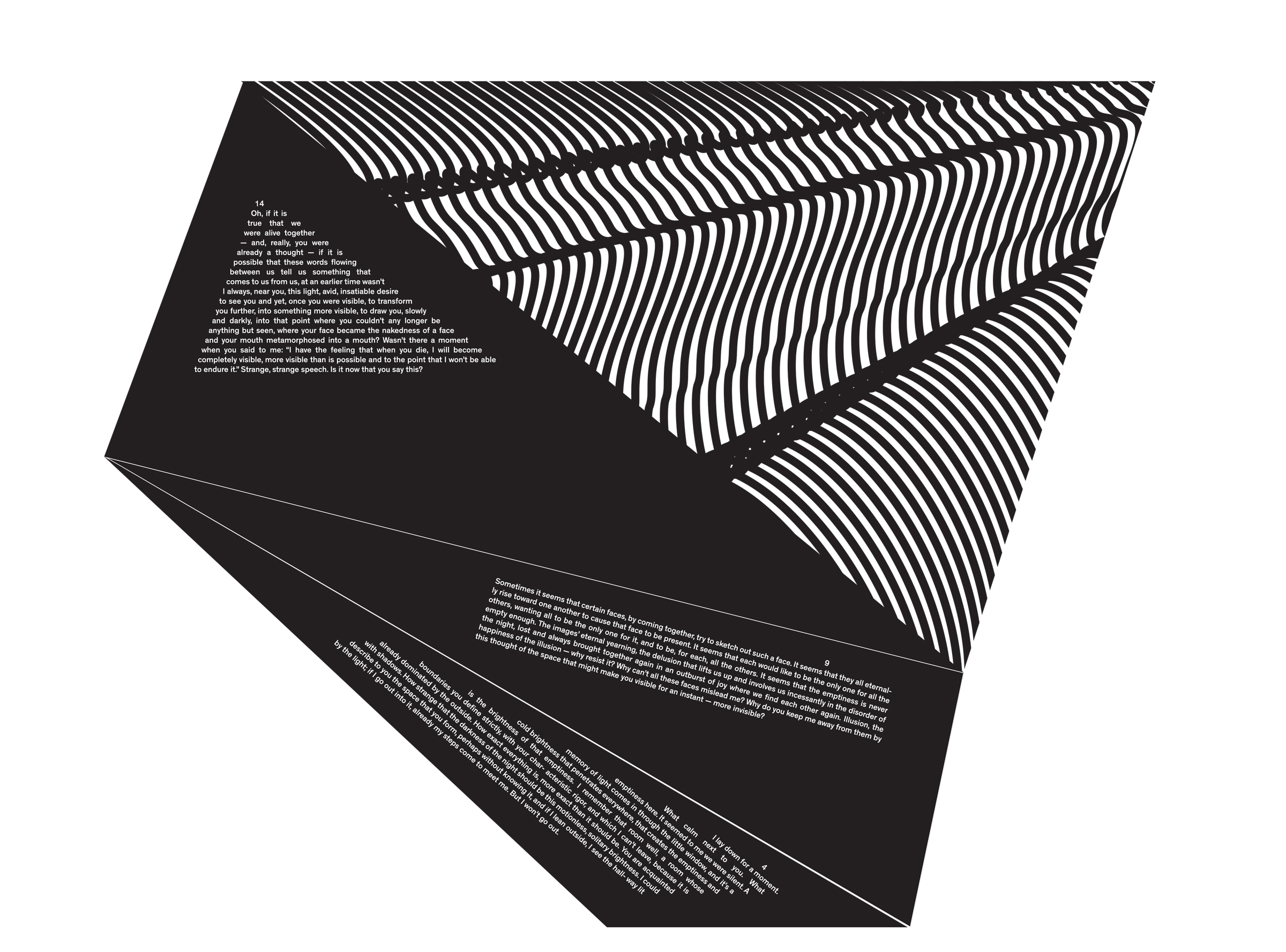 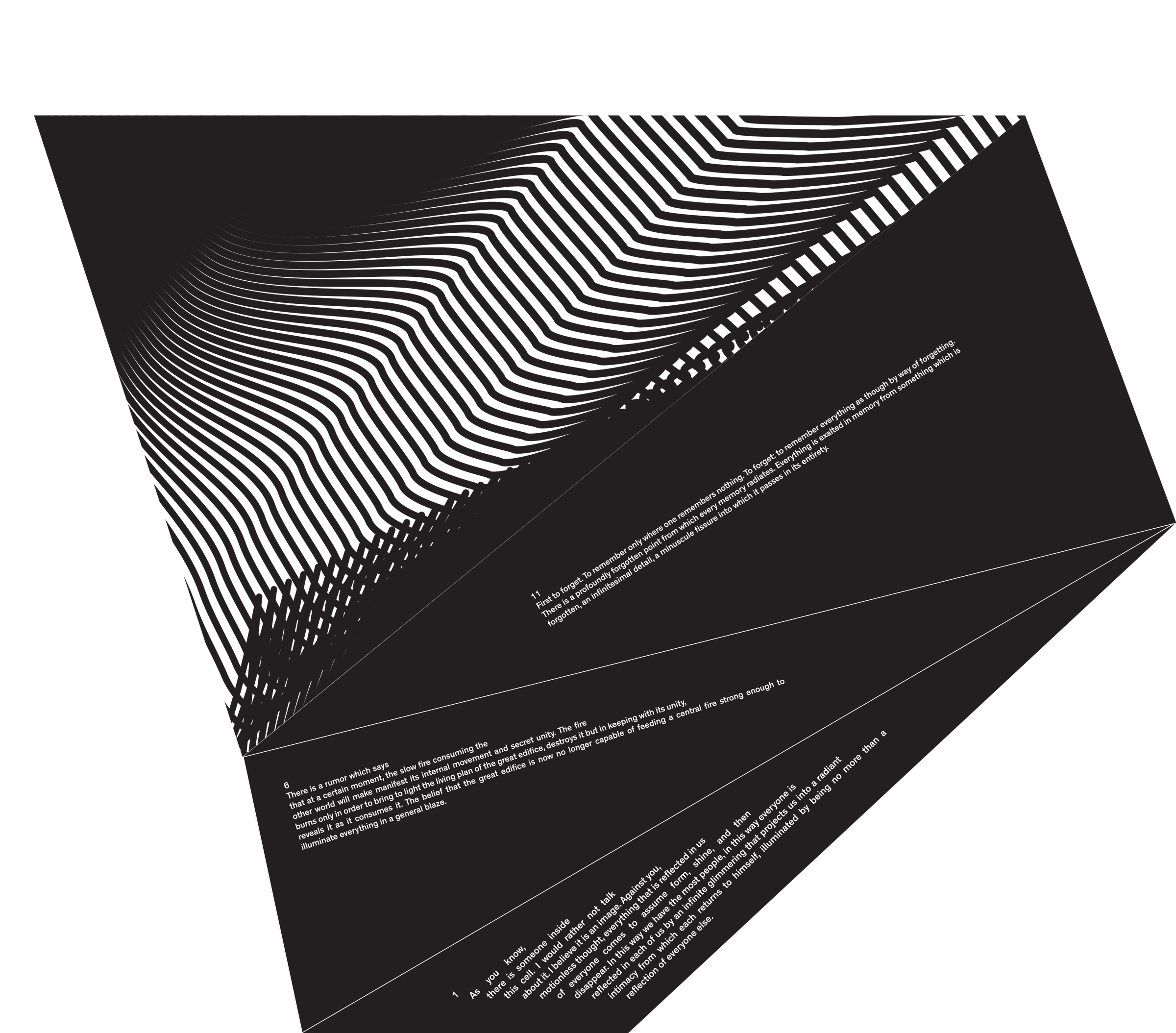 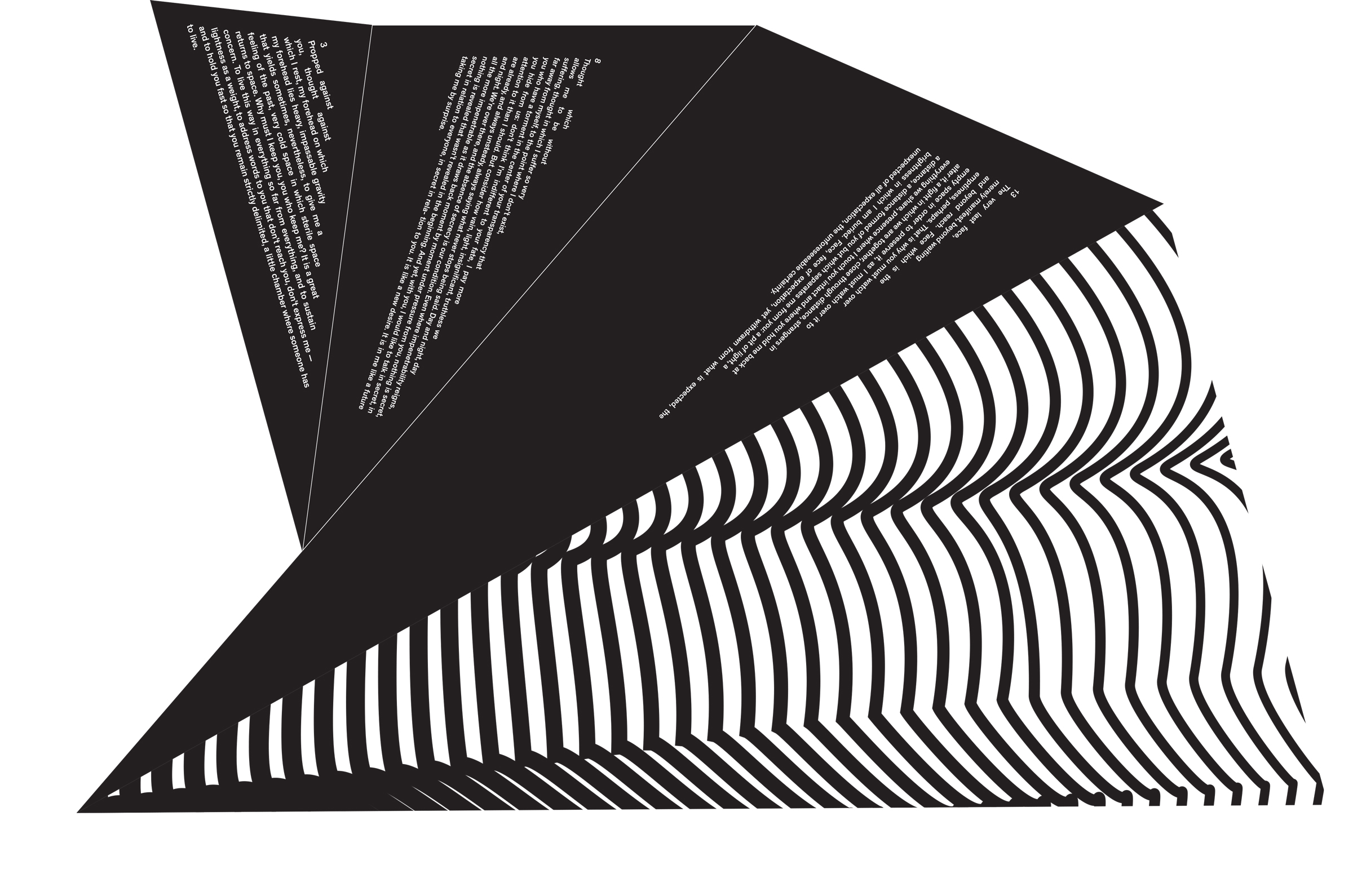 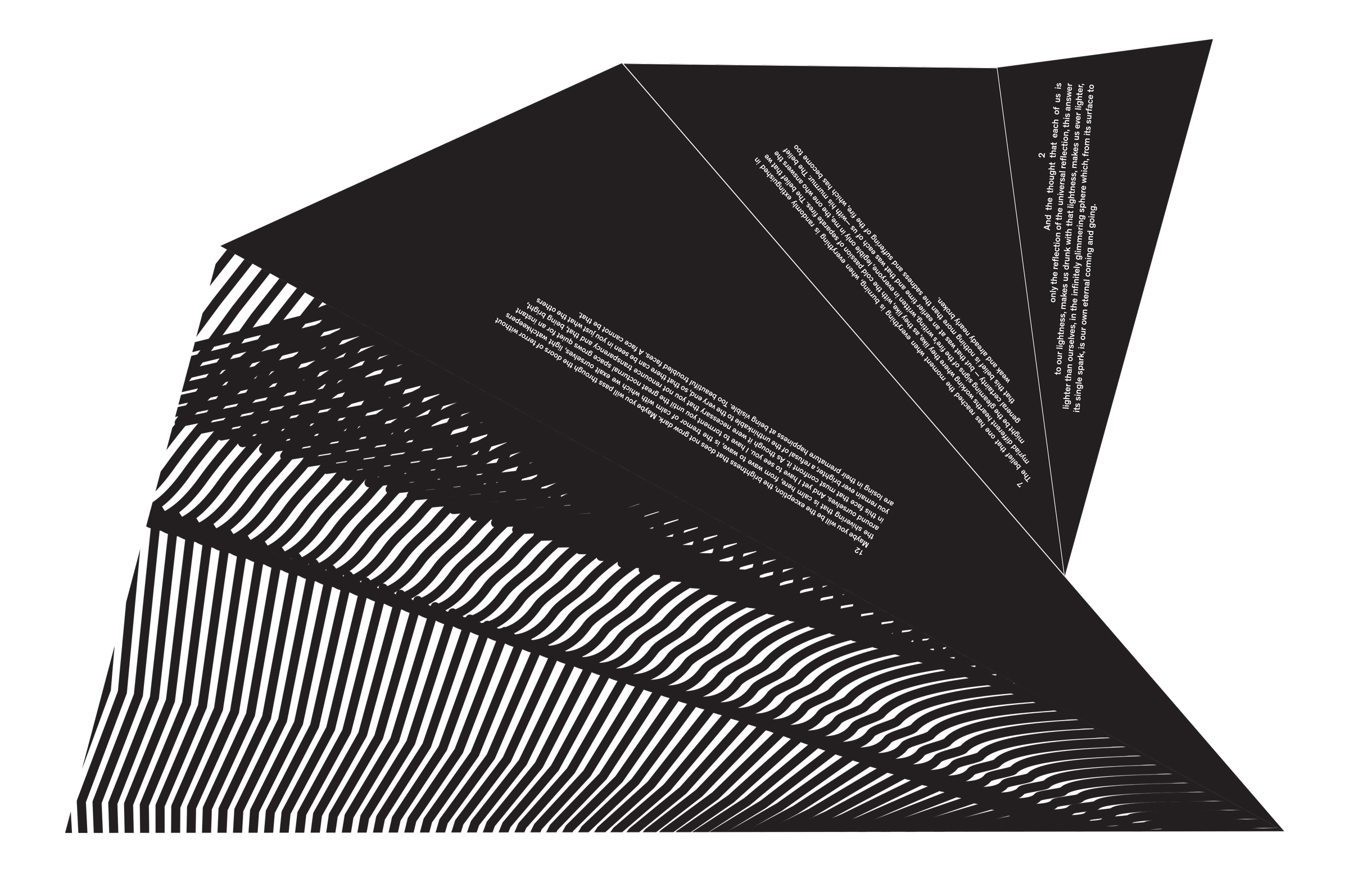 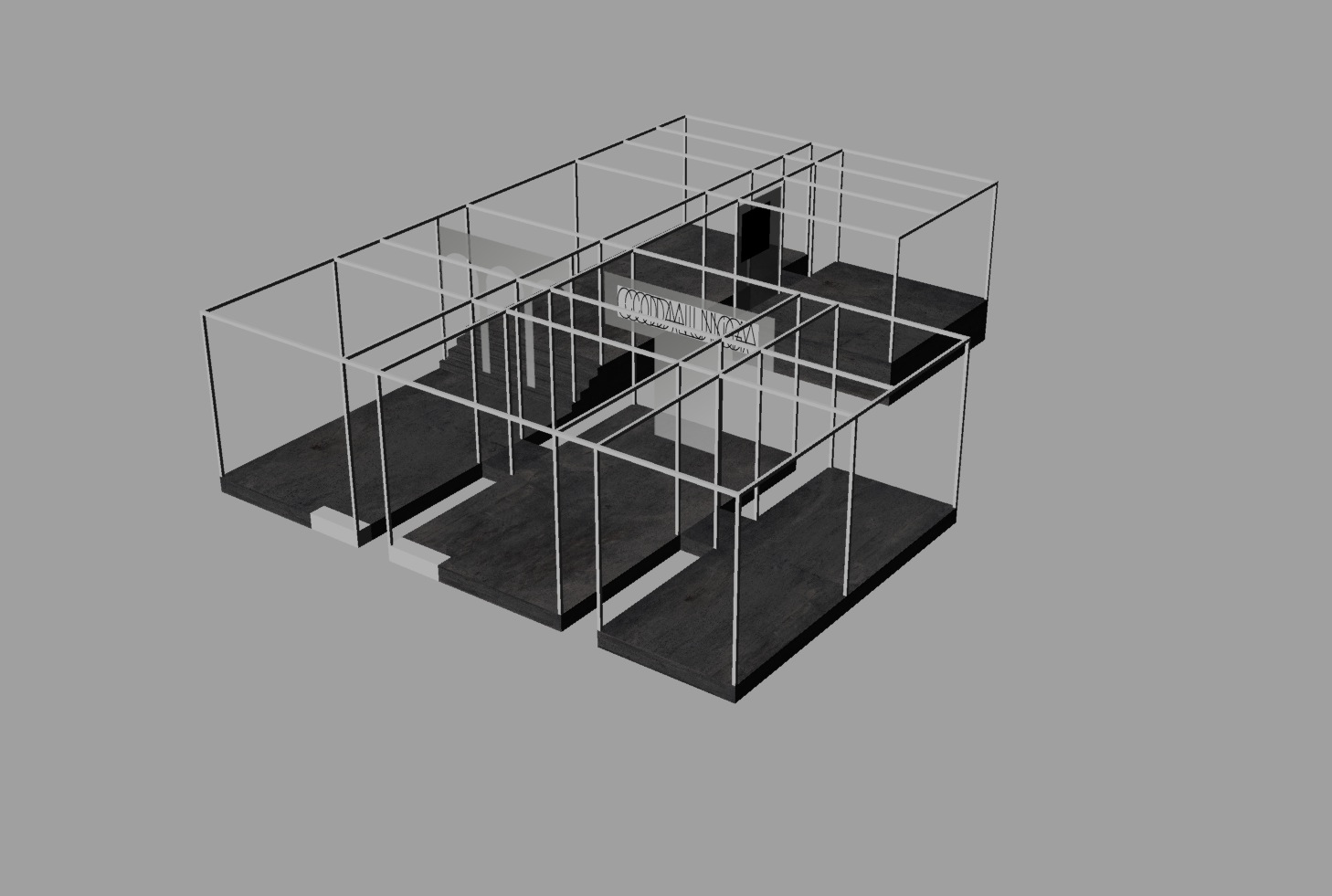